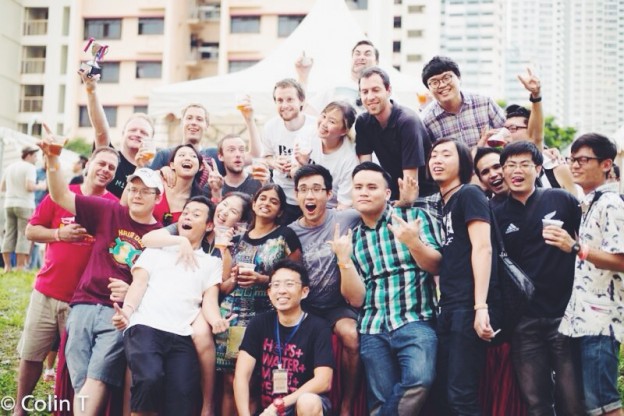 Like last year, the judges selected the best five kegs of the 30 contributed, which are brought out later at 5pm for everyone to taste and judge. I submitted an Unblended Lambic and Natasha submitted an American Pale Ale dry hopped with Galaxy and Mosaic.

With the event only kicking off at 3pm, I had two hours to kill. What was I going to do for two hours? Find beer, of course. I found craft beer legend, Meng Chao, wherever he is the beer is not far away. This proved to be the case when he poured me a Wild Ale Saison. I’m not a big fan of Saisons, but this was much more citrusy than usual, so I actually really enjoyed it (well, it may also have been the fact that it was my first beer of the day…) 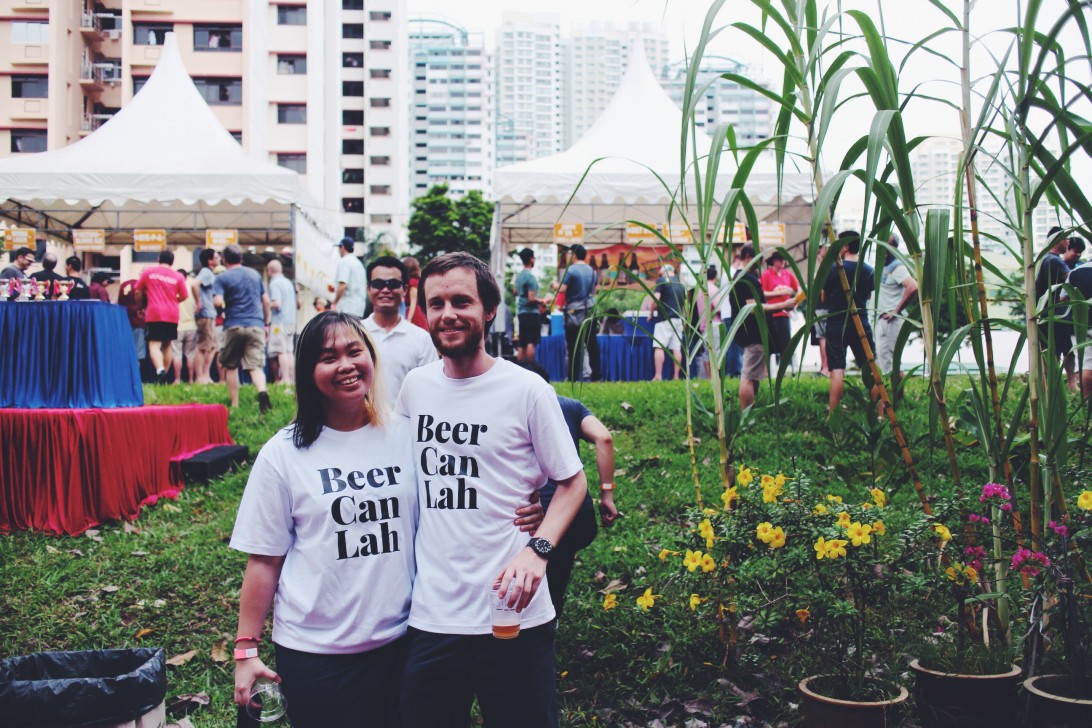 I also brought out a bottle of our oaked bodka, because I was so amazed that the vodka had turned into a bourbon-like liquid so quickly I wanted to share it with everyone. Also, I thought it was best to bust it out as early as possible as ending a long day of drinking homebrews with spirits would be a bad idea. Most people I gave it to thought it was a bourbon till I informed them it was barrel-aged vodka. I think the tasting persuaded some people in to making the leap into buying a barrel.

The vodka only managed to kill 30 minutes of time, so The Chad had a good idea for us to go collect and check how we scored on the bottles we submitted for the bottle challenge. Some of us received single digit scores, but what the heck. We like to experiment and we’re all still learning. Most people average above 25, which for BJCP I’m told, is very good. I found the feedback this year better than last year – I got detailed, constructive criticism for my Gueze from both Ed Allen (good luck for your BJCP exam, Ed) and local drinks writer, Brian Spencer. There were also two additional judges not in the original list we got from Raymond who judged Natasha’s Black IPA, but their one word tasting notes were not very helpful.

Because this is all about learning and improving, The Chad, as always, wanted to review his beers against his scoring. We received our second submitted bottle back and tasted them, and to be honest, we came to similar conclusions as the judges did. But then, controversy struck as Chad read John Wei’s feedback and found out that his Oktoberfest and John’s own Vienna Lager scored higher than John’s category winning Helles. Understandable, The Chad was pretty peeved and rightly quizzed Raymond on the matter. Raymond said that the highest scoring beers from each category made it to a final round, but his Oktoberfest didn’t impress the judges in the final round as much as the Helles did. Knowing this, I checked my Gueze’s score against Hong Yee’s smoked Berliner Weisser and found that I was one point short of his winning score. The only issue with the final round of judging was that there was no feedback, so it’s hard to know why Chad’s and my beer didn’t make the cut.

The bottle review took us right up to the official start of the iBrew Challenge, and after the first kegs were put on, the winners from the bottle competition were announced. 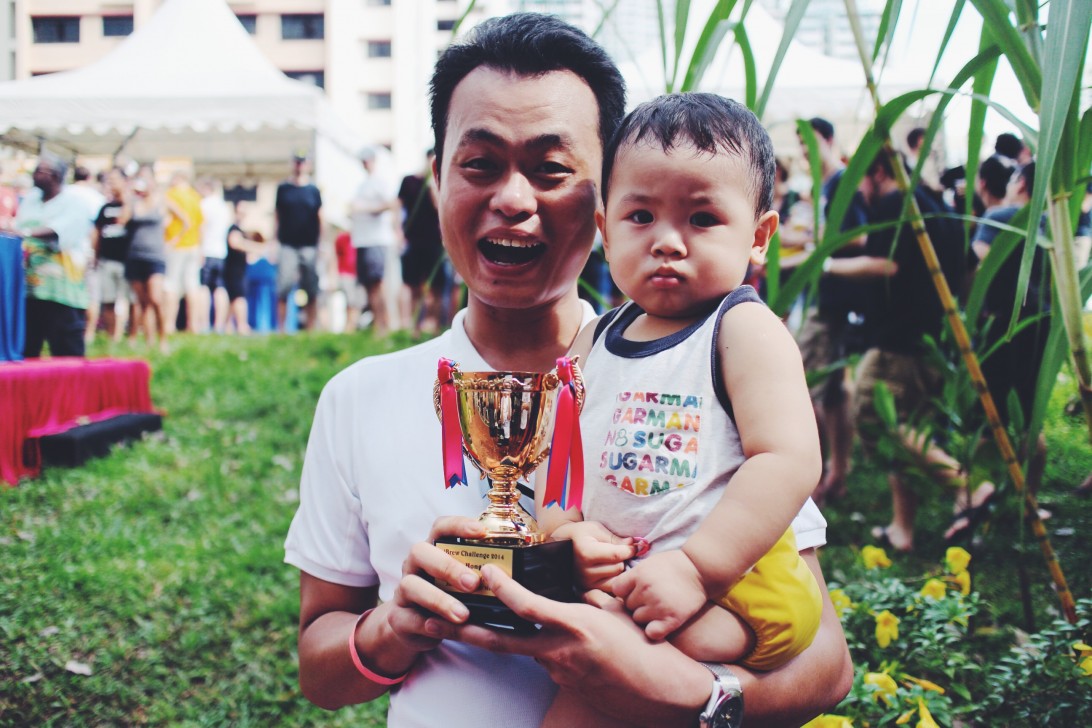 Graham Hunt has owned the Lager category throughout all these years, but John bested him this year with his Helles. Hong Yee took the special category again for a second time with his Smoked Berliner Weisser, and John came in a close second with his Brett Stout. 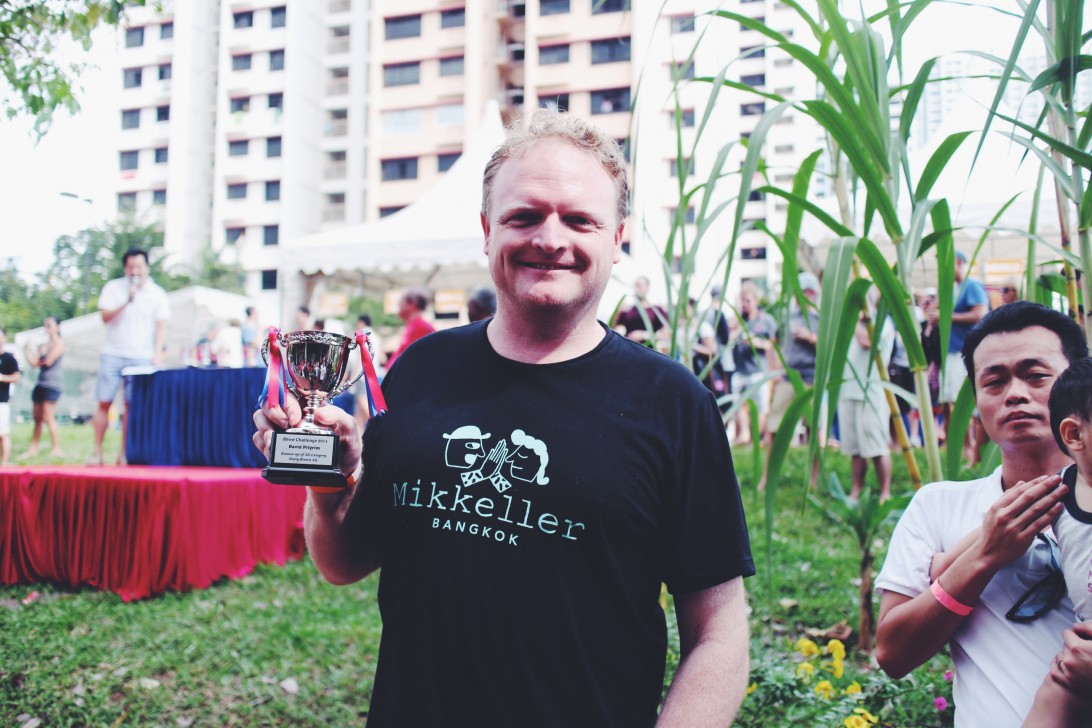 A Timothy Foong we don’t know took the Ale category, and Aussie Dave took second place. I’ve had his Nutty Brown Ale and it’s amazing – any other day, it would have easily won. Craig Everson won with his Orval Clone in the Belgian category, and being the hardest beer to get right, it’s a well-worthy champion. The final and most oversubscribed category was the IPA round. Winning this one, finishing second and taking the best of show was of course, Graham Hunt. The more impressive thing was that this was the first time he brewed an IPA (hard to believe, I know) – I had the pleasure of tasting it in the keg later that day and can see why it won. It has a great balance between malt and hops. It also earned points in my eyes by not being overdone like most American IPAs – it’s a sessionable one, and does not supper from the lack of a fragrant, hoppy nose like many English IPAs tend to do. 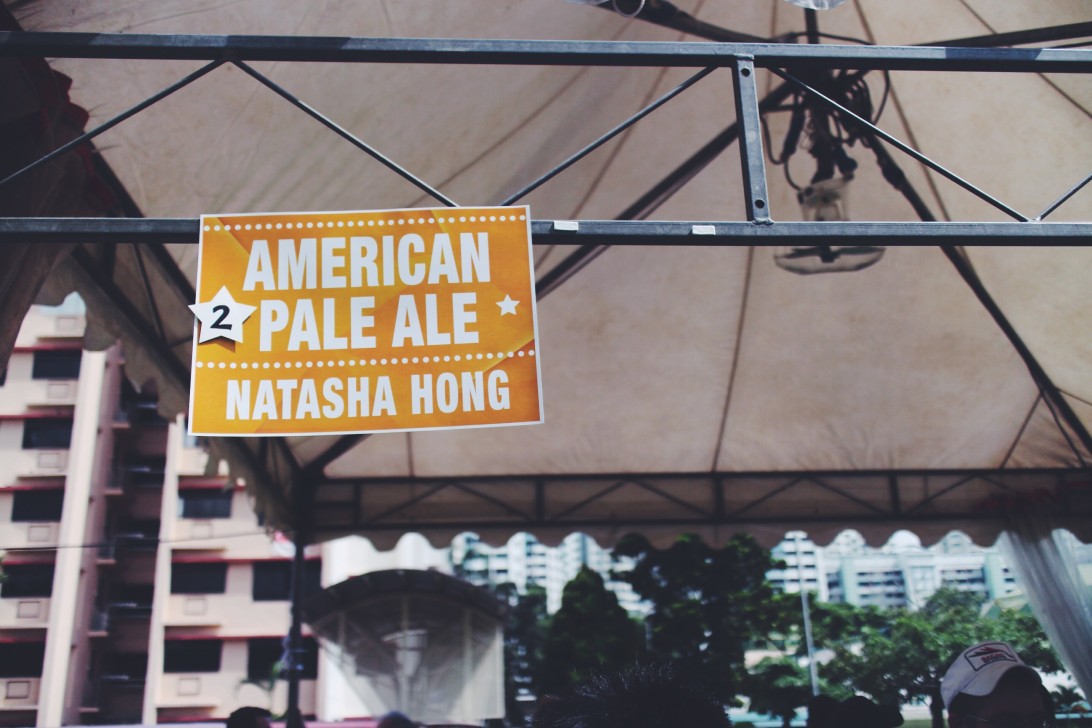 With the awards ceremony over, it was straight back to drinking the many beers on tap. One of the beers on during the day was Natasha’s Pale Ale, which was a huge success with the punters. It was also great to see the shock on some of the older guys’ faces when they realised that Natasha brewed this one. Personally, this Pale Ale was decent, but could have done with a bit more on the nose, which is mainly my fault as we did not leave enough time for dry hopping. Many people wanted to vote for her beer in the keg competition, but she had to explain to them that they couldn’t as she was not in the final five for judging. Her keg finished really quickly, and we then moved on to the many more on offer.

And then, the taps. 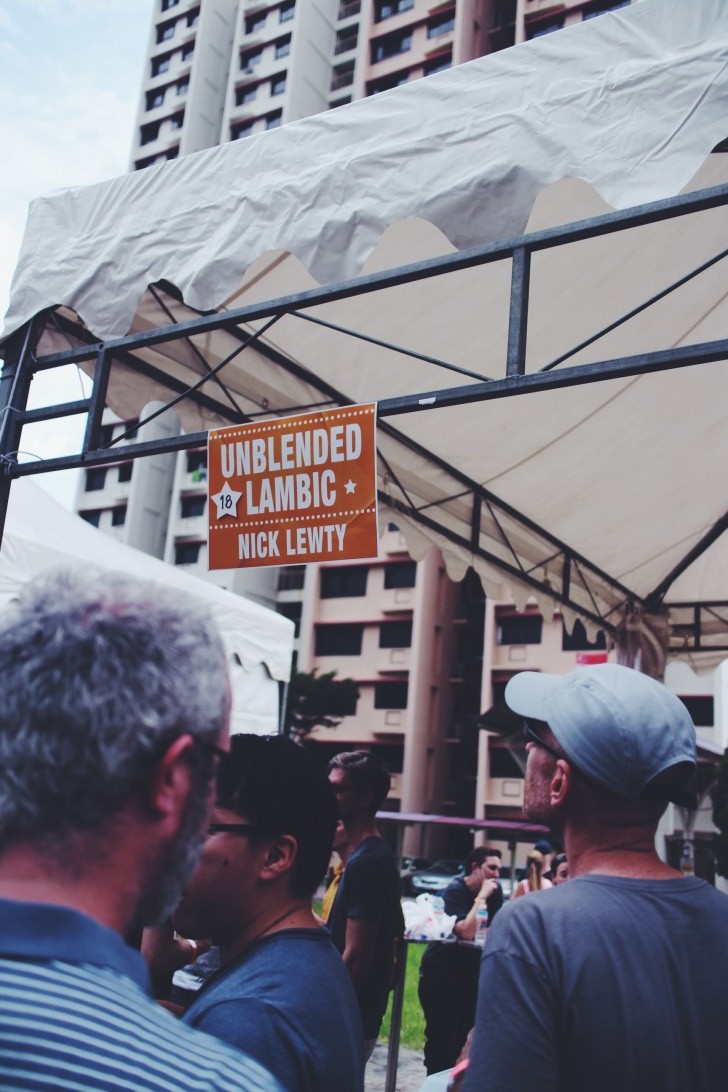 One of my biggest surprises that afternoon was that a beer I had entered – I call it My First Sour – had been chosen for the keg competition. I didn’t really want this particular beer to be in, as most people haven’t been exposed to sour beers and might think that something’s wrong with it, but this was probably the perfect way to get everyone to taste a sour beer for the first time. I soon found a line forming at my tap as people wanted to try my beer – I wasn’t meant to, but I snuck a few a taste, then worked to fill the 100 tasting glasses for judging up.

With the judging all done, I found out I actually finished a close second to Andrew Tierney’s super popular Bourbon Oaked Paramour – Andrew won, of course, after a quick tie-breaker judging by the judges. A lot of thought and effort went into making the Paramour though, and it was amazing how much vanilla was in the beer, considering no vanilla was added – he used slices of Spanish mahogany he got cigar shops to save just for him. I put down my second place to having lots of friends voting for me, and the fact that Singapore does not really have a good supply of sessionable sours (salted sours and barely-wine sours don’t count), so maybe mine was the best you can get. 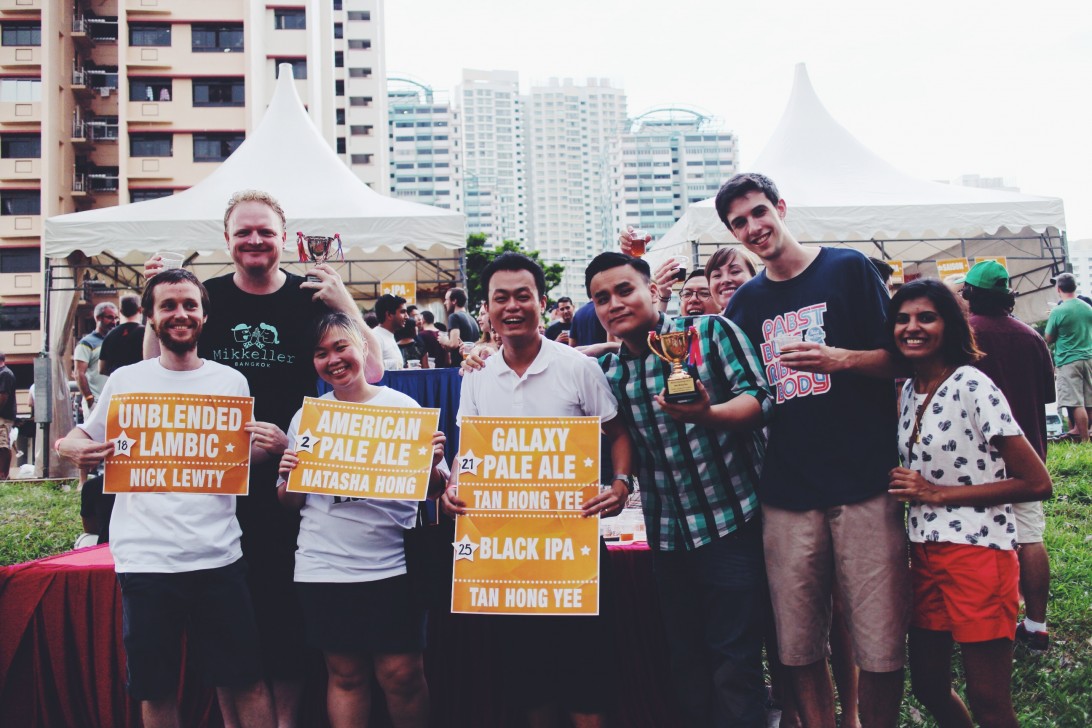 Part of the festivities that afternoon was also the best beer t-shirt competition, which Natasha won, probably because we had a large contingent of friends cheering for her. To be fair though, a few people did ask me where they could buy Beer Can Lah t-shirts, so maybe we should start selling them :)

We downed a few more beers before the event officially closed, then got our things and headed to Brewer’s Craft to buy more beers (yupp, probably the worst decision we made all night!) We ended up with all of Meng Chao’s supply of canned Beavertown beers, then set off on our post-iBrew Challenge ritual of having dinner at Mr Prata. Holding The Chad’s CO2 cylinder with Natasha, John, Dave, Chad, Seetha, my doppelgänger and Jimmy in tow was a difficult journey, but we got our fill of the wonderful, hot oily pratas and curry sauce after a day of beer. 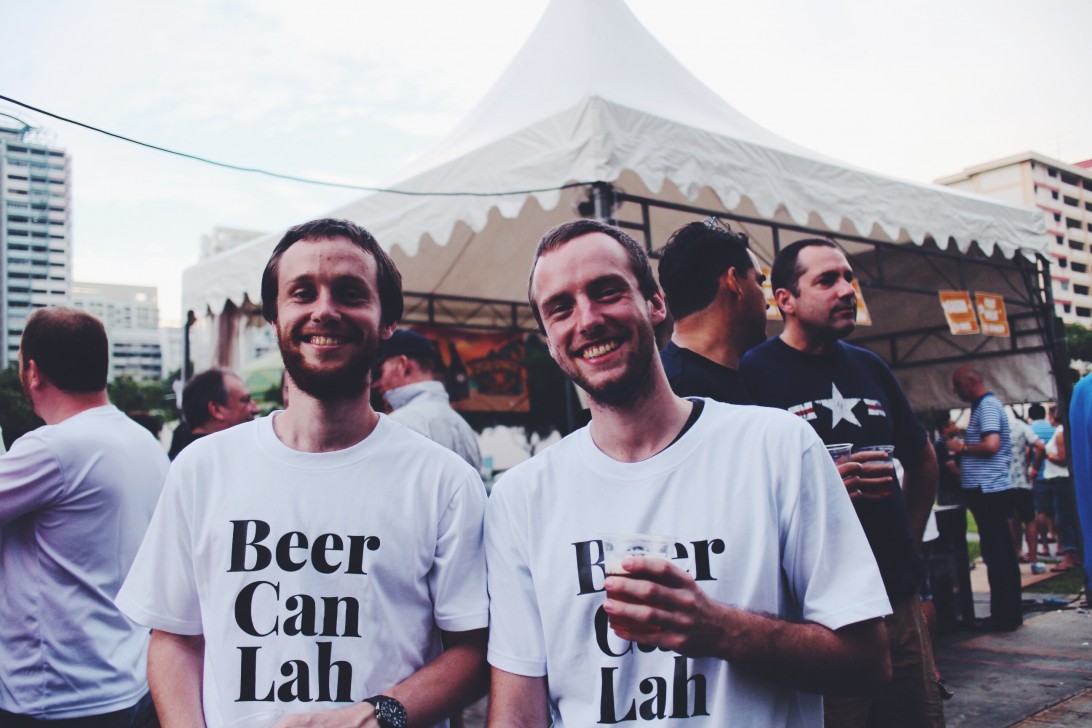 Full of carbohydrates, our journey continued back to our place to drink the cans we had acquired from Brewers Craft. Except for the bottomless vessel that is Ozzy Dave we all struggled to finish even one beer some people protested against drinking by falling into a deep slumber on our couch. At this point, drunk as we were, we decided to discuss the finer points of the iBrew Challenge, rambling on for a few hazy hours until the clock struck midnight, at which time everyone turned in to Cinderella and all rushed home, probably for the best really. But all in all what a thoroughly enjoyable day!

Thanks a lot to Raymond Lee for organising another great iBrew Challenge – it is so good to get all the brewers in one place once a year. Special mention to flying Jimmy for flying around and making sure that the taps never ran dry, and props also to John Wei and Andrew Tierney for bringing in the bulk of the beers. Shout out to Justin Corbitt for tasting 30 out 36 beers. Great effort mate. 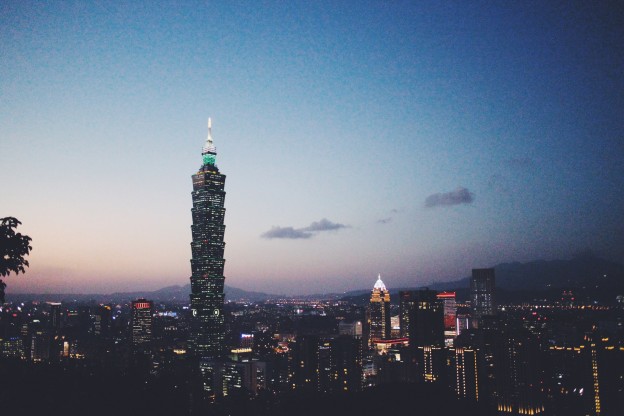