Hello! How’s everyone been? Beerfest kicked off last week, but Nick and I had to unfortunately skip most of it. It was depressing, really, but we’ll tell you more in our next post, or the next time we meet.

What ultimately turned out to be a highlight for us at this year’s festival though, was a fringe event that Hops Connect‘s Jon O’Connor (pictured, second from left) and Jonathan Lau from Munton’s (yupp, the malt guys!) put together for brewers and beer industry people.

Dissatisfied by how Beerfest had removed the Asia Beer Awards from its programming this year (he’s certainly not alone), the two Jons stepped up and set up a gathering for local and regional brewmasters to hang out and network at Brewerkz’s Riverside Point outlet. We were part of a privileged few invited to pop by, and though the event started a little slow with almost everyone coming by late, we had a great time catching up with our brewer friends who we hadn’t seen in awhile, as well as meet new faces. They managed to score a coup by getting Bruno van den Bossche from Pater Lieven, the team from Staerker beer in Malaysia, as well as brewers from South Korea and Japan to also swing by.

When the press conference finally did kick off at around 1pm, Jon said a few too little words – we knew he had big news to share, but somehow didn’t! – formally introduced Jonathan Lau (guy first from left in our cover photo), the sales and marketing director for Muntons beer malts in Asia Pacific and handed the mic on to a Scott Robertson on crutches. Poor guy. The head brewer for Brewerkz took the chance to sort of explain once and for all why he was in that state (bike accident, he said) but more importantly, had news to share about the brewer’s latest collaboration. 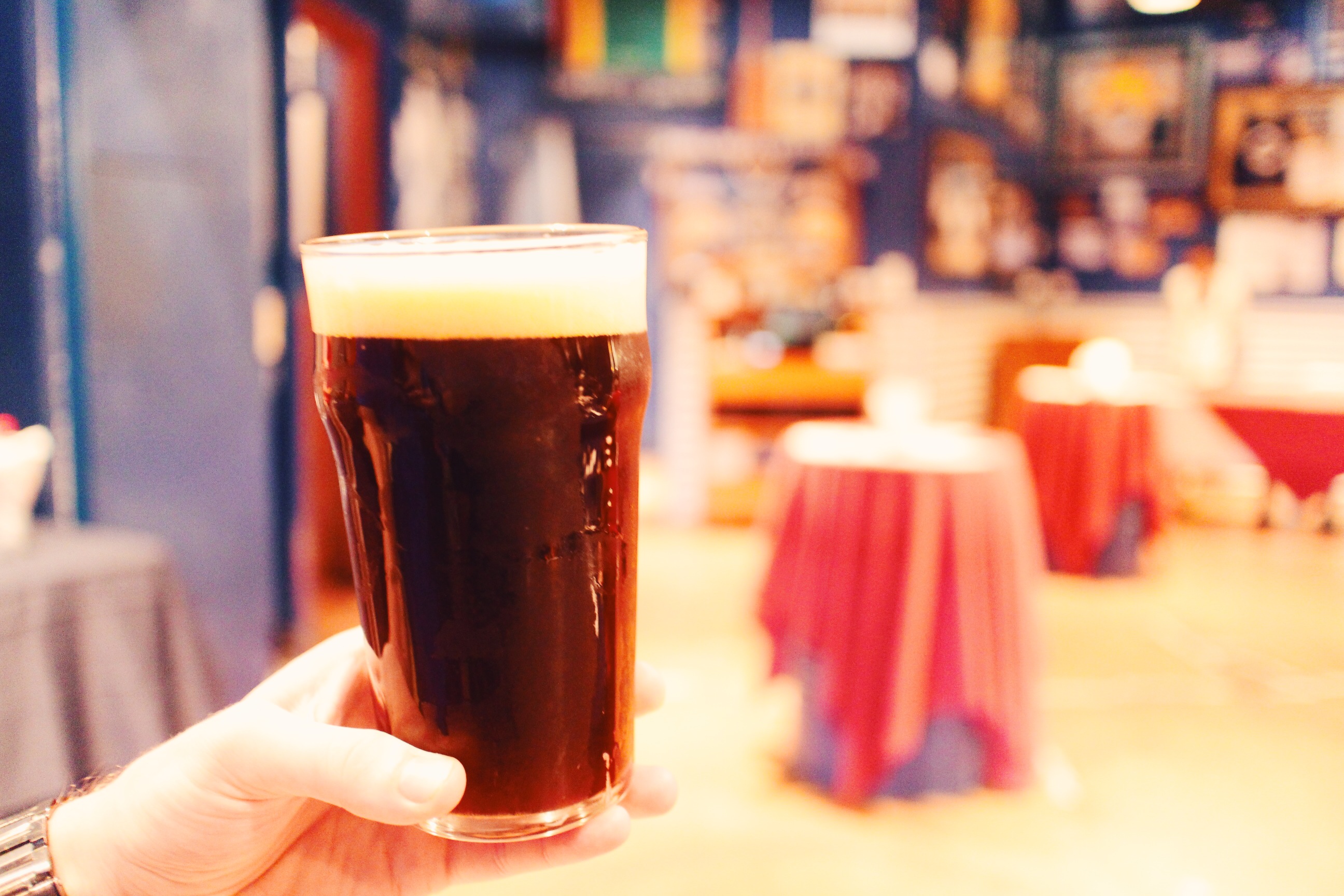 Named the Hoppy Monk, this dark ale has creative input from Belgian gypsy brewer Gunther (Bensch, we think? Scott couldn’t recall his full name, but a mailer from Brewerkz mentions the beer is made in collaboration with BIIR, which points to Bensch) who brings his expertise in cooking up Belgian beers to the local microbrewery’s table. Scott said the drink takes reference from the Abbey-style beer recipes, using traditional Belgian malts, dark and light candi sugar and high alpha German hops, followed by Australian Ella and Galaxy hops, as well as Centennial (Scott’s favourite) to finish. The final beer, punching in at 8.5 percent tastes to us like a crowd pleaser – though it’s a bit too sweet in the body for my own tastebuds and tame in its hop profile, despite the sexy hops put in it. Pretty cool though, was that Gunther and Scott brewed a third batch that’ll take Singapore’s craft brewing to Spain, where the beer will be tapped out of kegs and sold in bottles.

Brewerkz got even more mic time when it was next handed over to its new CEO, Tan Wee Han, who took over the post from the microbrewery’s founder and CEO, Devin Otto Kimble (he’s reportedly sold his stake in the company awhile ago, but give us time to hunt the rough date down – details are still sketchy). The guy’s racked up impressive experience in the wine industry. Founding Crystal Wines – they’re one of Singapore’s biggest distributors – in 1998, he shared how he hopes beer will become a dinner table drink, and that the local craft beer community will band together to grow craft beer’s visibility and the public’s knowledge of the drink. ‘Each of us shouldn’t be doing it alone,’ said Wee Han. ‘We should be doing it united, and put aside our differences … to grow the industry. With knowledge, the consumer will be able to differentiate, and if they can, they’ll appreciate. If they appreciate, we’ll all stand to gain in unity.’

The press conference ended with a call for a yum seng with all present, and after, Nick and I had to make a quick getaway to return to the office. We were really happy someone took the initiative to really lend Beerfest an industry weight this year, even though it wasn’t quite an official gathering as part of the festivities, and we’re happy for Jon who managed to pull off quite a turn out. Congrats!

How about Hops Connect’s big announcement then, you wonder. Well, that’s something that truly deserves its own post. Stick around. :)

Edited 28 July 2014: We’ve amended the article to include mention that Jonathan Lau from Munton’s is a co-organiser of the event. We’re sorry for the initial omission!