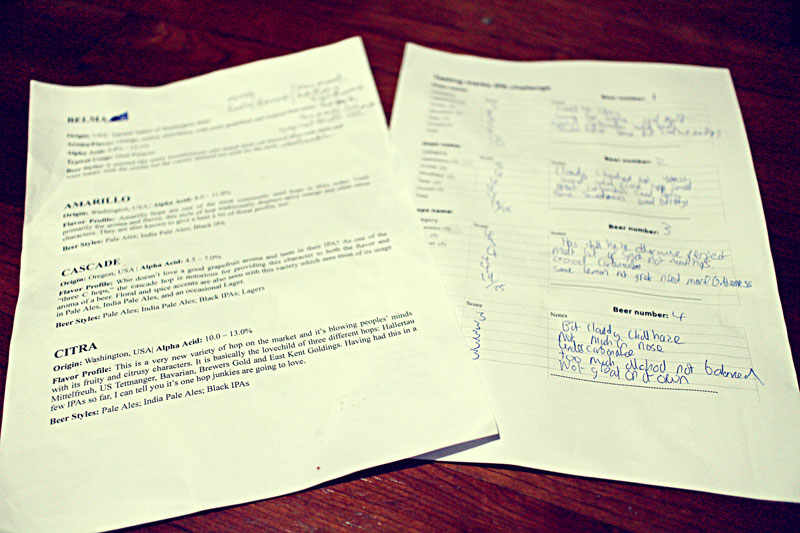 What a busy, beer-filled weekend it was for Nick and I! In the mood for solid craft beer with the coming of last week’s iBrew Challenge, we organised a single hop IPA tasting at ours for a few of beer pals.

As part of our goal of understanding hops much better and the flavour notes they lend to a beer, we came up with the idea to make a series of brews. They each used the same malt recipe, where possible (some of the more specialty ingredients had to be subbed out here and there, but the difference it made was negligible) and each hop had full reign to flavour each batch in the boil and in the dry hopping stage. We’ve had people try the beers and they seriously don’t suck (we can’t say the same of Brewdog’s IPA is Dead series of beers in which they used East Kent Goldings, Waimea, El Dorado and Dana. Bam!) and we had finally collected enough of our bottles to conduct a proper session.

Nick made this round of tasting even more challenging by offering it blind to our guests. Each person was given an info sheet explaining the flavours associated with each hop, and we each had to guess which hop was in each beer. I bet you thought that it was easy, didn’t you? 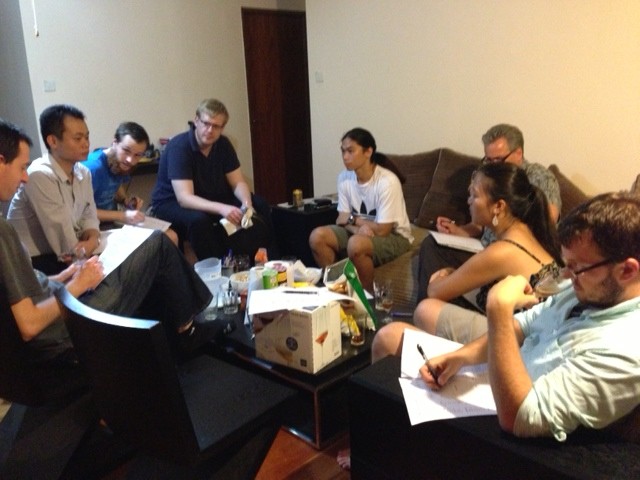 It wasn’t even close! Less than half of us (myself included – I’m mildly chuffed :)) came out tops having guessed a grand total of… TWO BEERS! OUT OF EIGHT! correctly (I’m no longer chuffed.) It didn’t help that the Cascade, perhaps because of the way it was bottled, exhibited the distinctive cats piss note that’s said to be a quality of Simcoe – that threw a huge curveball to a bunch of us who switched our answers as a result – and that everything tasted… fruity. Clearly, we have quite a way to go before we become the next Michael Jackson (we mean this Michael Jackson, not let’s-dangle-a-child-by-the-ankle! Jackson.)

Nevertheless, the session was like learning, but with lots of fun! We did a second round of sipping, this time with the answers, just to reinforce what we remember. If you’re reading this and think we’re way ahead of the curve when it comes to tasting, worry not. Ultimately, it’s something I always say that is really, really important to remember about craft beer: just drink lah! Craft beer drinkers always stress how un-snobby the drink is, and I agree wholeheartedly. Learn to identify the flavours you like in a beer, confirm what hops are in it with a beer geek friend (like us!) and the next time you read a beer label with names of hops, you’ll be able to roughly know whether or not you’ll enjoy that liquid in the bottle – assuming the beer doesn’t get fucked up somewhere in between, but that’s rare if you go to a good bottle shop or bar. 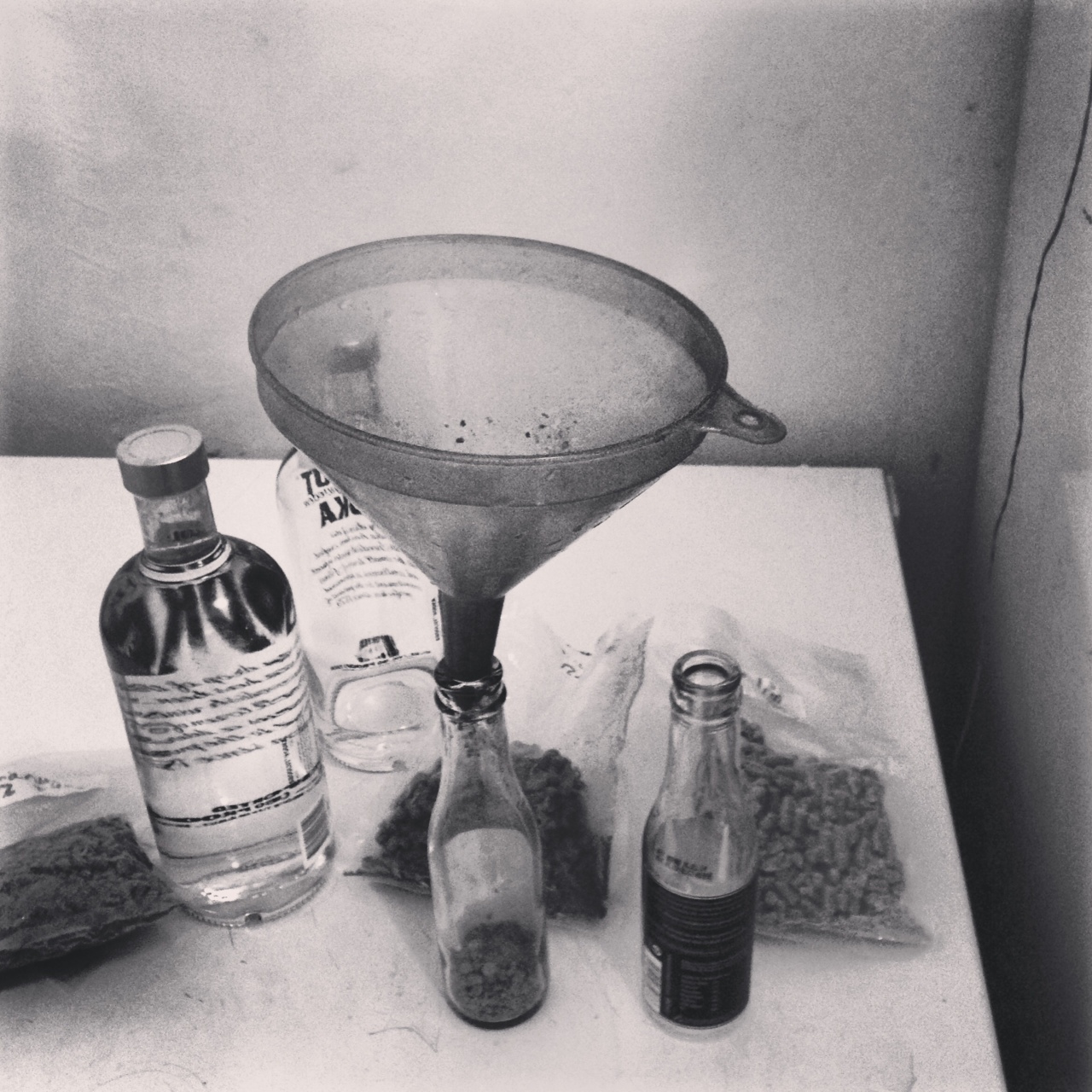 We’d like to think the session helped us brewers understand what different hops can contribute to the beer. I also brought out a mini-experiment that’s been brewing in my head. Inspired by the idea of cocktail bitters and infusions that the awesome dudes at bars like Bacchanalia, 28HKS and The Spiffy Dapper have come up with, I made a bunch of infusions with hops! Unfortunately mixing the infusions with the beers didn’t quite work as the vodka clearly added a boozy overtone to the cheap leftover Harbins (a kind visitor brought some over at the last club meeting) so that’s put the idea that hops bitters can rescue a shitty beer to bed.

Predictably, our night descended into a tasting of beer’s older, more mature brother – whiskey. But more on that in my next post – the awesome stuff we had deserves a blog post of its own, and we’ll give it that respect. :) 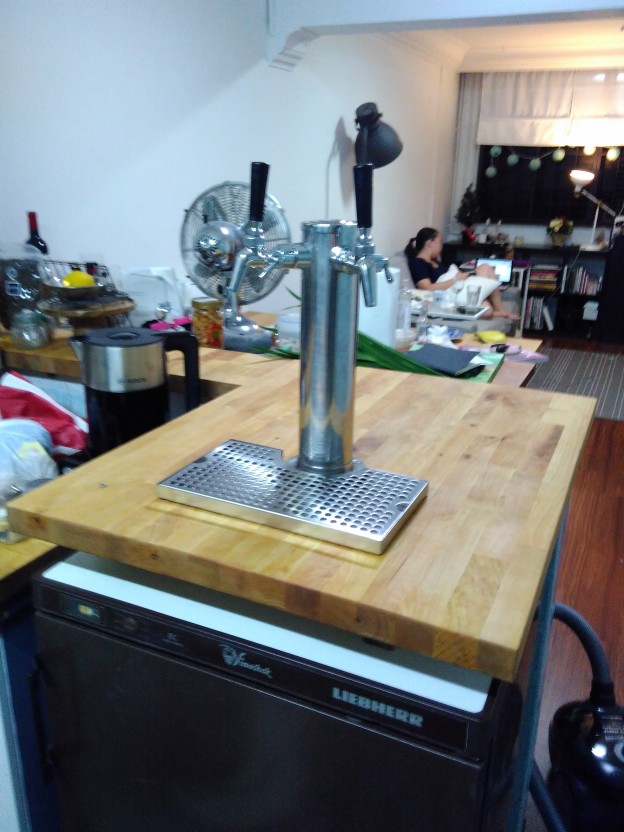