The older of the two Mikkeller bars in Copenhagen, our second stop on the craft beer tour was to Mikkeller’s smaller Viktoriagade bar. The walk to this one was slightly less tranquil than the one to Stefansgade.

Our friend, Adam, took us through quiet small streets in the Vesterbro neighbourhood, and at one point, mentioned to us that a particular street we were traversing was the site of a shooting just a few months ago.

The air of expectant worry aside, Adam asked if we might run into Mikkel himself when we were there, but I pretty much laughed the question off. It was the week before Christmas, and Nick and I gave up hope of even visiting breweries on this particular holiday as we knew that the brewers were probably off and away taking their well-deserved breaks – I didn’t harbour any hope at all that we’d run into anyone of note stepping into any of the craft beer bars we were to visit. Well, not until we were square in the face of two brewers and a superstar squirrel, actually.

It was a really funny reunion actually. We had just met Mikkel a few months ago on his whirlwind visit to Singapore (we wrote about our beer pairing dinner with him here) and as we crossed the narrow doorway splitting one room of the bar from the other, the last person I thought I’d see was there – there in the second room of the bar by the beer taps was Mr Bjergsø himself! What are the odds eh? It was hilarious – I stepped up to him to say hi, and the man’s jaw dropped. He looked at me, pointed at me with a ‘what are you doing here?’ expression, and then turned to look at Nick behind me and spontaneously cupped his hand under his chin, as if to ask what happened with Nick’s beard. :D

He certainly remembered us, and what a coincidence it really was! Mikkel said he only popped by the bar about four times a year, and that he was here this time around because Jonathan Queally, the head brewer from Alpha State (Nick thought he was the singer from The Darkness – click on his name to see why he thought that) was in town and they were hanging out. 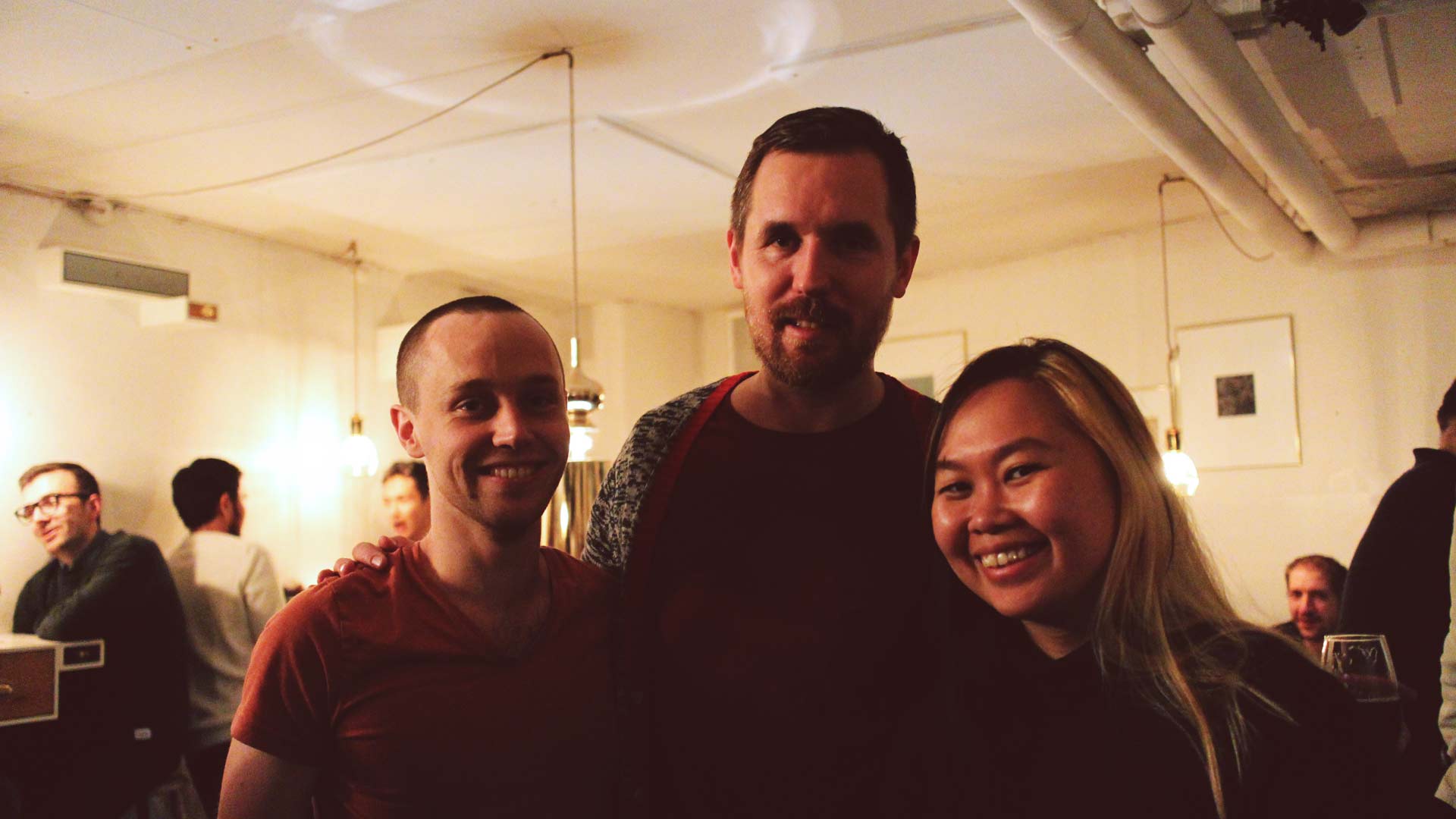 We didn’t get to talk to Jonathan, but still, it was a happy happenstance to have run into two brewers this close to Christmas – pretty cool stuff. Of course, we had to have our picture taken with Mikkel. :) He also so so kindly took care of our tab that night – a totally unexpected and amazing gesture that we’re immensely grateful to Mikkel for. :) 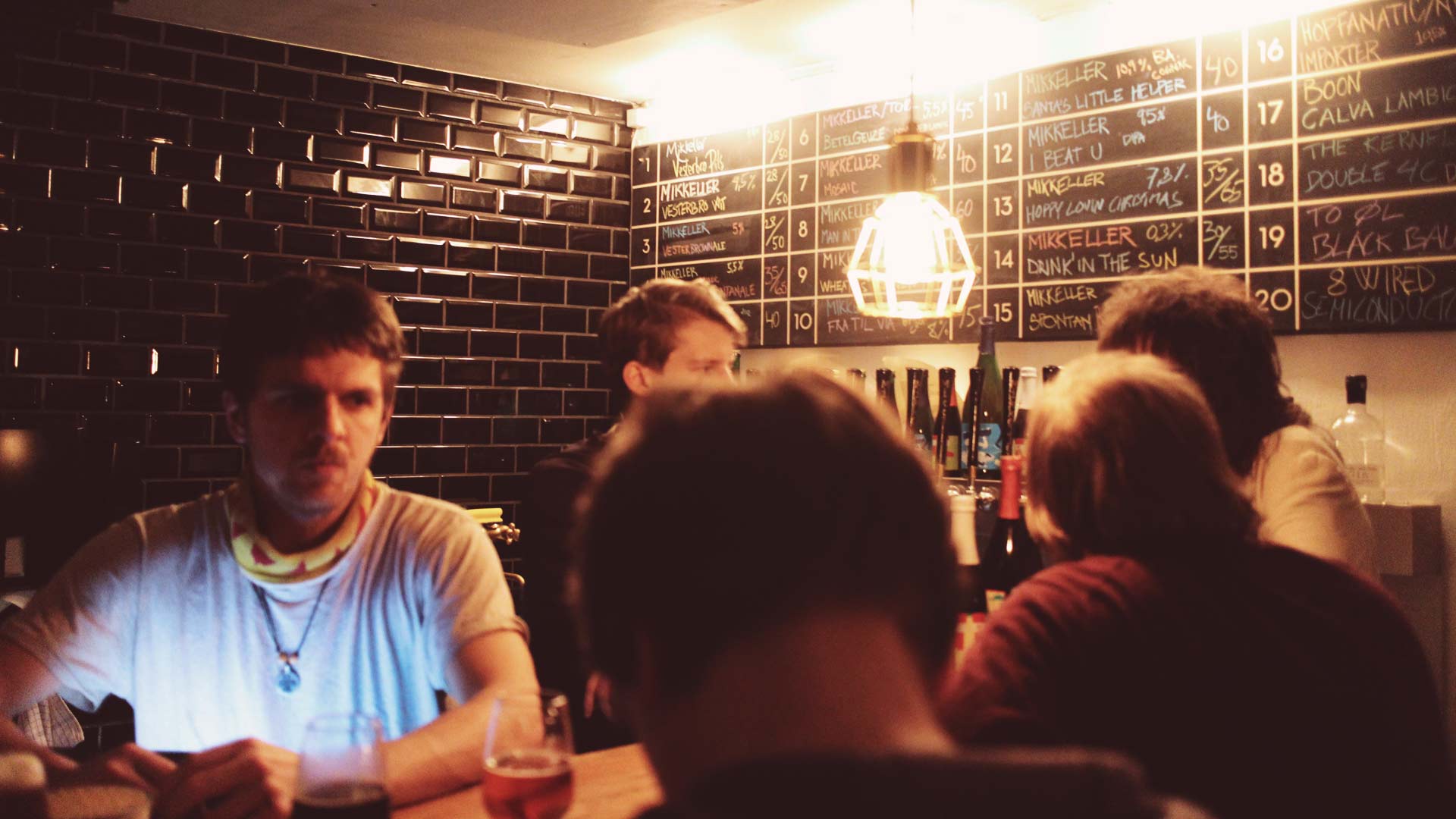 At first glance, the selection at Mikkeller Viktoriagade pales in comparison to the boards at Mikkeller & Friends on Stefansgade – the bar area’s much smaller with just two dudes working the 20 taps in service, and with its more limited shelf space behind the taps, it does look like there isn’t that much to pick from. But if you actually do make the trip out to the Mikkeller bar in Viktoriagade, don’t do yourself the disservice of not asking for the bottle menu. That thing is SOMETHING ELSE. 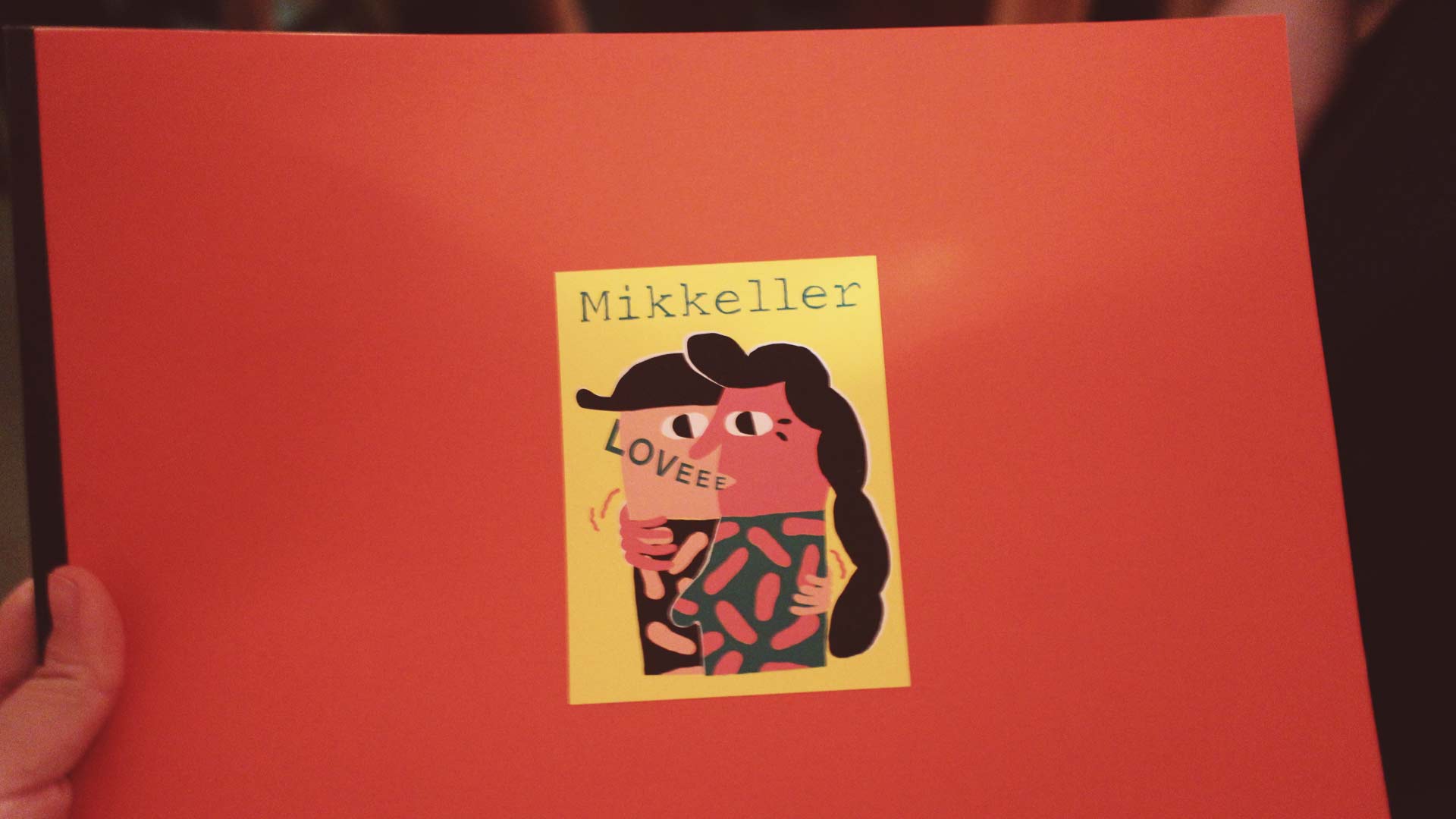 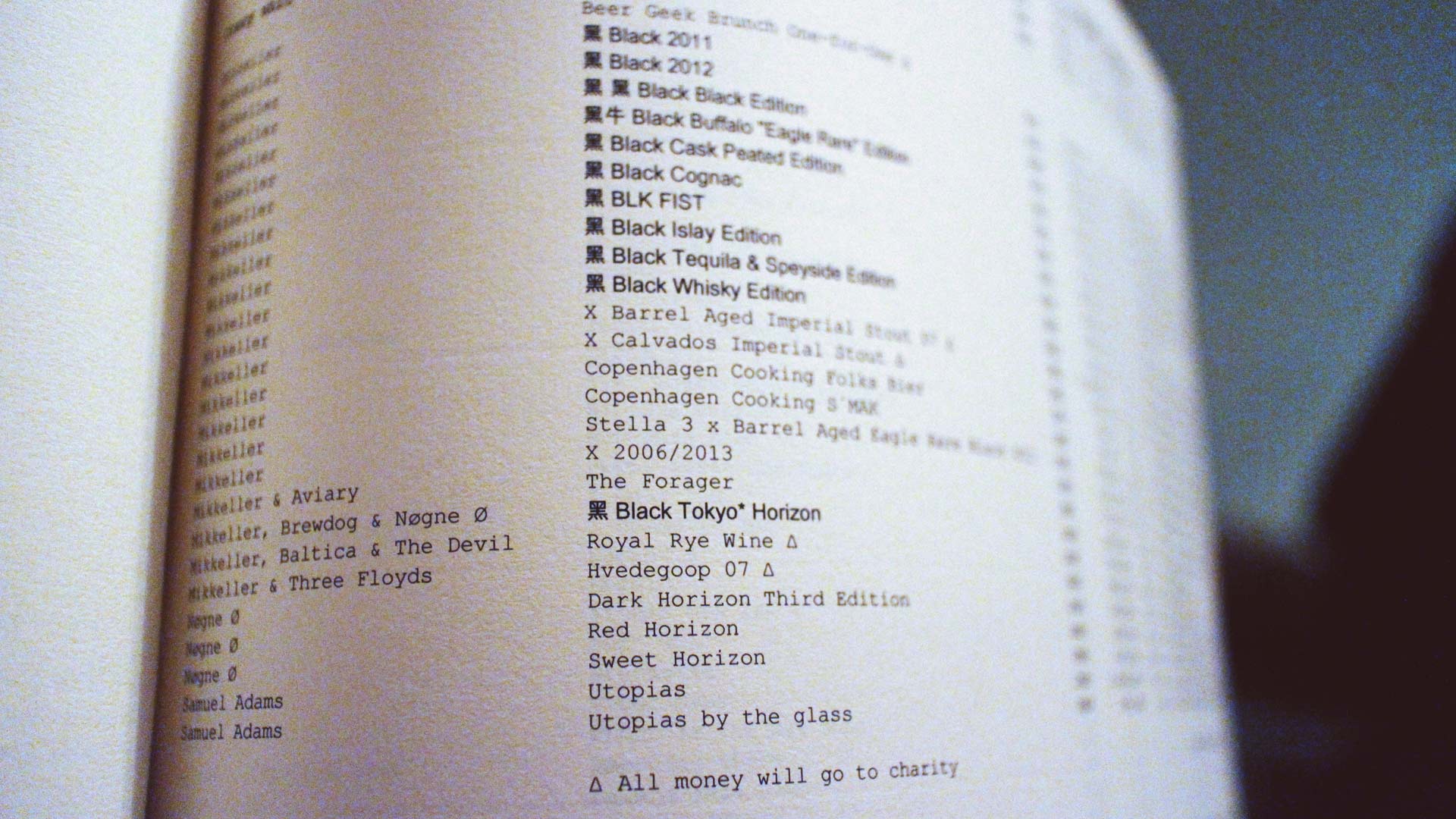 I seriously don’t know where in the bar they keep all their bottles, but they easily had hundreds of beers listed in there – collaboration beers by Mikkeller you’ve never heard of, beers by To Øl, Mikkeller and Three Floyds you’d never dream of ever being able to afford (quite awesomely, Mikkeller donates the profits for the super expensive and rare beers to charity), and of course, this guy: 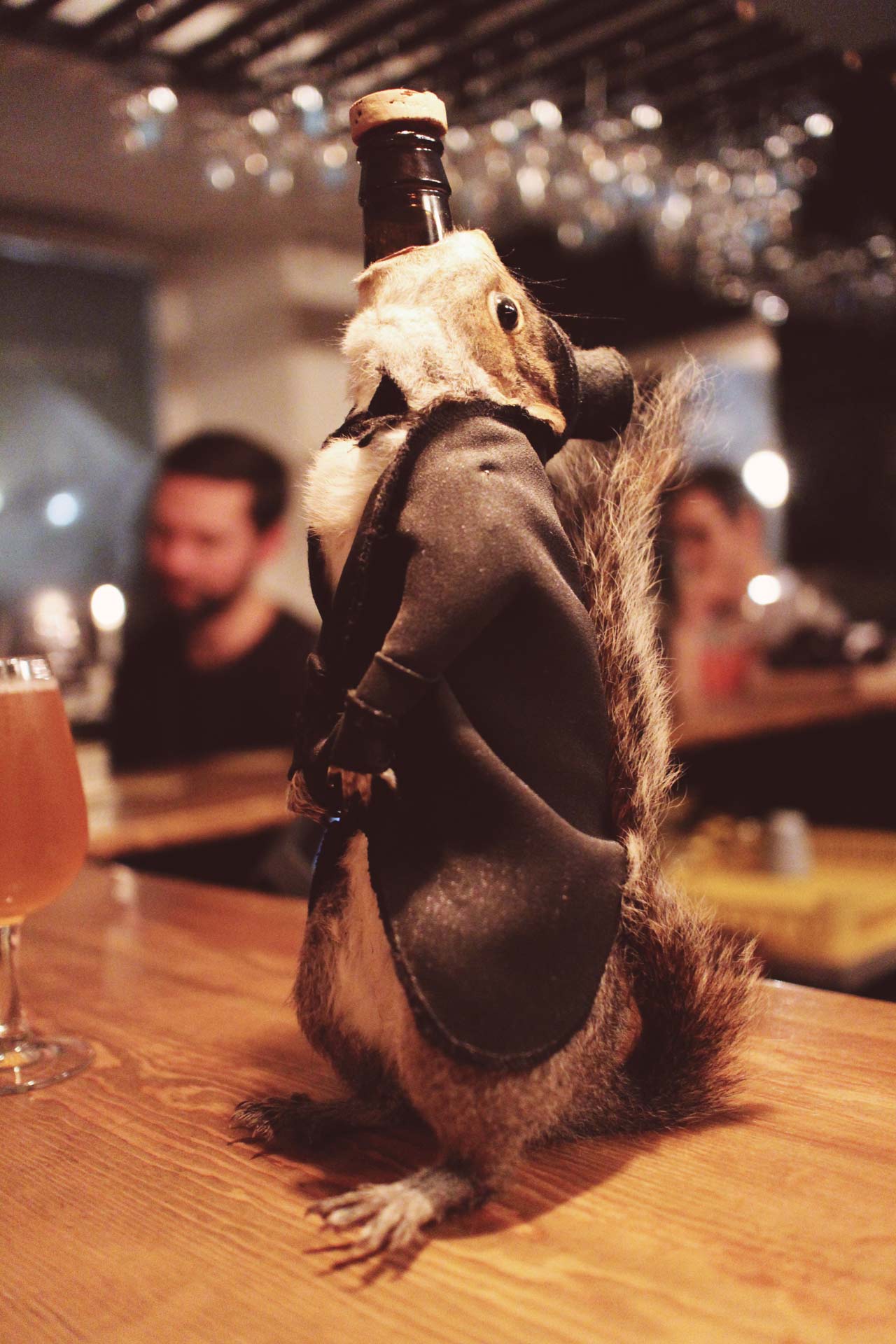 Dayum right. You’re looking at Brewdog’s End of History squirrel. If you don’t quite know the story behind this beer, just know that it once punched in as the beer with the highest percentage of alcohol in the world at 55% abv. Only twelve bottles were ever made (each bottle was wrapped in a taxidermied stoat, squirrel or rabbit) and the bottles were sold out in just four hours despite its £500 (some say £700) price tag. We highly recommend you watch Brewdog’s hilarious video on their website to get acquainted with this piece of brewing experimentation.

I spotted him behind the bar and did a ‘OMG. Is that…?’ to the bartender, who gave a mini-eye roll and escorted the guy off his corner on the shelf for yet another beer fanatic to have a closer look at. That shit is beyond rare, and here we were, stroking its furry belly and marvelling at what kind of crazy elixir Mr Furry was guarding in him. Mikkel told us that he managed to get three for the bar – one bottle was auctioned off for charity, the other still sits in the bar, and the last… oh, my, gosh, butter fingered and shattered by a Mikkeller bar manager! I get chills just picturing that scenario in my head – it’s the stuff of freaking nightmares! 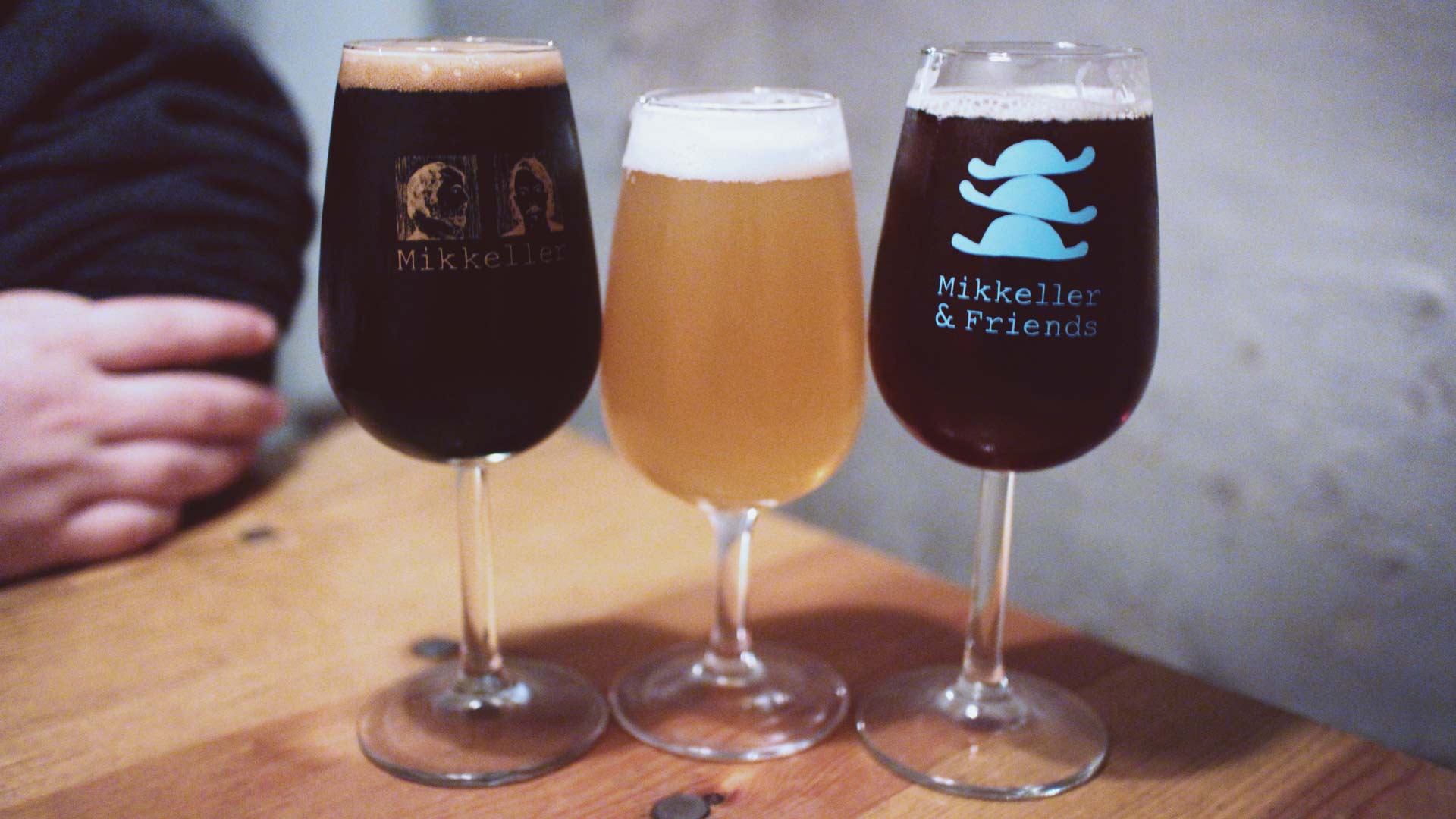 All the excitement aside, Adam, Nick and I hung out at the bar and drank the beers mainly on tap (didn’t want to venture into the expensive bottled stuff – we felt really bad taking advantage of Mikkel’s generosity), chatting about life, the Big Bang and evolution until I fell asleep in a tiny corner of the bar with mouth wide open (I could have possibly been snoring too…), jet-lagged as hell.

I’m sorry once again for writing a post of nearly 1,000 words. You know what they say is an absolute rule of writing for web – never post anything too lengthy, lest you bore your audience. But I couldn’t help it. It was quite the epic night out in Copenhagen for us and we just had to share our story, wouldn’t you agree? :) 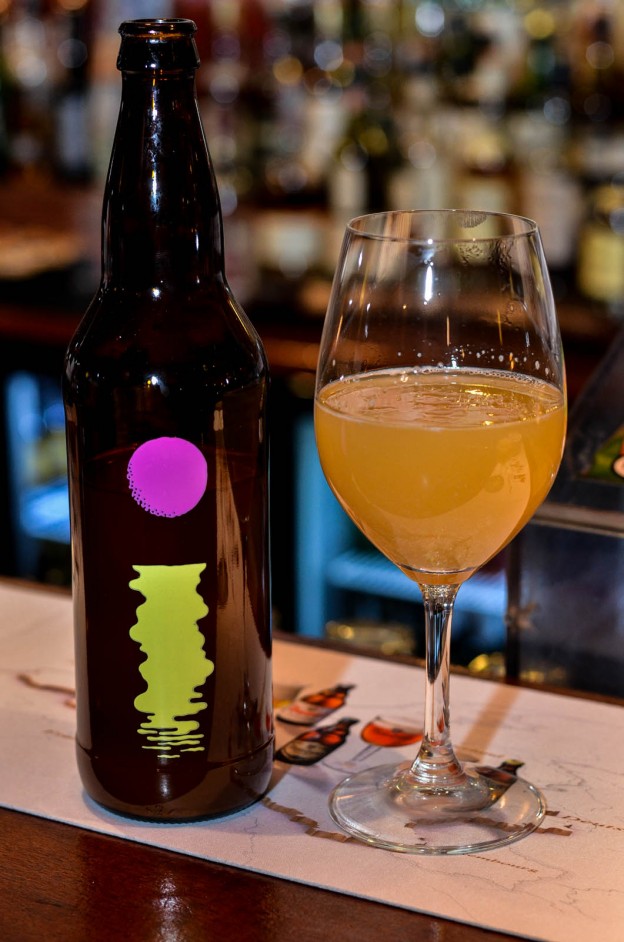